Turning the Wheels – Cycling Without Age

CHeBA’s Older Australian Twins Study Co-ordinator, Dr Vibeke Catts, has joined over 13,000 Cycling Without Age volunteers world-wide in piloting purpose-built trishaws, which provide seniors the opportunity to get into the outdoors and (again) experience wind in their hair.

A generous private donation to Montefiore Randwick provided the funds to purchase a trishaw. Throughout 2018, Mr Adrian Boss from BIKEast worked alongside Montefiore’s Leisure & Lifestyle and Volunteers departments to train volunteer pilots and get the program up and running. The first Montefiore residents were invited on rides in early December 2018. After just three successful outings, there is a queue of residents wanting to join Dr Catts, and other volunteers from BIKEast, on rides around Centennial Park on Monday mornings.

Worldwide, more than 60,000 elderly people have been on rides and the Cycling Without Age trishaws cover more than 2.2 million kilometre each year – that’s 53 times around the globe.

This volunteering endeavour doesn’t just provide the opportunity for seniors to be outdoors, but is also significant in providing enriching social engagement. A healthy social life is now being acknowledged as an important factor in reducing risk of dementia.

“The relevance of social connectedness in relation to healthy brains cannot be underestimated,” said Dr Catts, who was born in Denmark and whilst growing up, rode a bicycle as her main mode of transport. After arriving in Australia in 1992, Dr Catts didn’t ride a bicycle for more than twenty years, but took it up again a few years ago. She says the biggest pleasure of riding is working hard to climb a hill and then rolling down the other side and feeling like a 10-year-old again as the wind rushes by her. Her own pleasure in riding and being in green spaces is a key motivation for her to volunteer with Cycling Without Age, and it is already very evident that residents of Montefiore enjoy the social outings and the experiences, such as sights and sounds, from the front seat of the trishaw.

CHeBA has been able to conduct significant research into the ageing brain with the support of leading aged care provider Montefiore, which has partnered with the Centre since its launch in 2012.  CHeBA and Montefiore share a mutual goal of improving the quality of life of the older population, and CHeBA’s Co-Director Professor Henry Brodaty is the Montefiore Chair of Healthy Brain Ageing.  CHeBA is extremely grateful to Montefiore for the ongoing support provided. 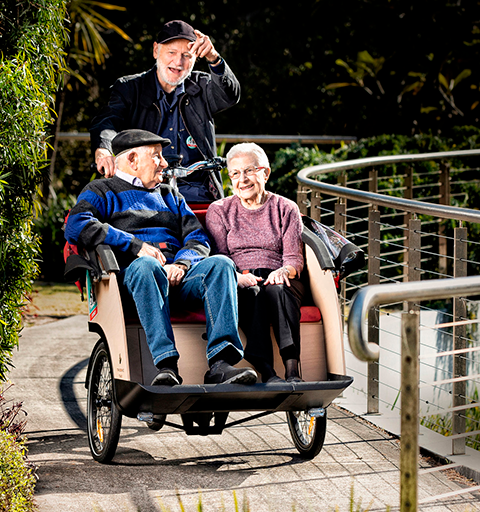 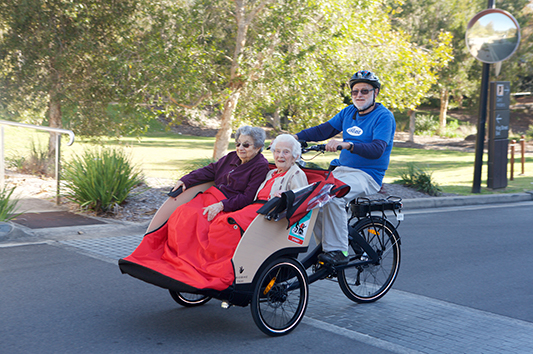 For more news about Cycling Without Age, see:

Turning the Wheels – Cycling Without Age