A tribute published in AJN honoured a man who saw the worst of humanity yet remained an optimist throughout his life. Mr Jaku, who came to Australia in 1950 and helped found the Sydney Jewish Museum, shared his story of survival to ensure that the horrors of the Holocaust were never repeated.

During World War Two, Mr Jaku was imprisoned in four concentration camps, including Auschwitz where the number 172338 was tattooed on his arm.

An incredible survivor, Mr Jaku not only lived to tell his story but dedicated the rest of his life to being an advocate for peace and kindness.

In 2020, to celebrate his 100th birthday, Jaku published his memoirs.

The book – entitled ‘The Happiest Man on Earth’ – showcases an extraordinary tale of survival, and a man capable of incredible forgiveness.

“I have lived for a century, and I know what it is to stare evil in the face,” he writes in his book.

I have seen the very worst in mankind, the horrors of the death camps, the Nazi efforts to exterminate my life, and the lives of all people. But I now consider myself the happiest man on earth.

From 2017 to 2020, Eddie Jaku was a participant in CHeBA’s Sydney Centenarian Study; a research project that explores the genetic and environmental determinants of extreme longevity.

“I remember him as always courteous and a true gentleman.

“In more recent times I saw him as a spokesperson for Holocaust survivors and the Jewish Museum.  I was impressed with his compassion and refusal to be weighed down by resentment despite the horrors he had endured,” said Professor Brodaty.

“He was blessed with a loving wife, family and grandchildren, one of whom was a good friend of my daughter. Vale Eddie, a true ‘mensch’. 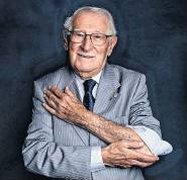 Australia's Prime Minister Scott Morrison described Jaku as "an inspiration and a joy" who "chose to make his life a testimony of how hope and love can triumph over despair and hate”. He received an outpouring of tributes from other political leaders, Jewish communal leaders and organisations.

According to the NSW Jewish Board of Deputies, Mr Jaku was a ‘‘beacon of light and hope’’ for the world and would be remembered for his resilience and joy.

Professor Henry Brodaty, fellow Co-Director Professor Perminder Sachdev and all staff and students at CHeBA extend heartfelt condolences to his wife of 75 years, Flore, sons Andre and Michael and his grandchildren and great-grandchildren.